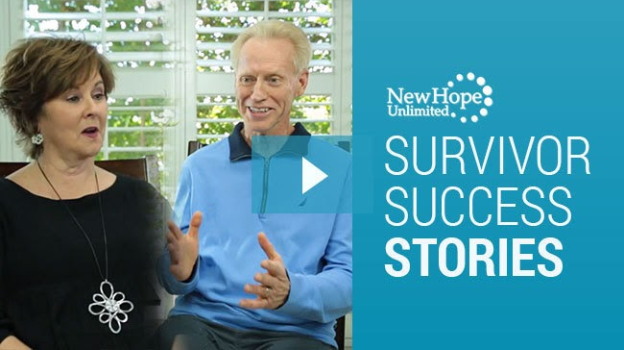 
My name is Rick Dill and this is my wife Beth Dill and we're from Huntsville Alabama. I was diagnosed with local metastatic prostate cancer two years ago it's classed as T three B it was you know pretty devastating whenever you found that out it's not curable in the in the US so you know depressed and feel a little sorry for yourself but pretty quickly you know, you've got to turn around and decide that you're going to see if you can do something about it or or just go on my doctor even before I got the main diagnosis that told me to read all I could about immunotherapy and I had done that. So I studied every, you know, component in the immune system, from the dendritic cells to antibodies and T cells and all of that.

So I started looking for a facility to go to I talked to five different facilities. And they were all very nice, all asked all the questions, you know, answered all the questions that I had asked. And, you know, they would all treat some form of the mind, body and spirit. They will treat the diet, you know, give you a better diet, so they'll buy and all I think the reason I chose New Hope was just because they, they had the most comprehensive part of that treatment involving the immune system. Of all the ones that saying and all the research that I've done from hundreds and hundreds of articles that will research on the immune system and how it can be used to fight cancer. The facility is tremendous. I mean, when I came here, you know, you're a little bit apprehensive going to any foreign country. But everybody is so nice from anybody that you meet. It's just a wonderful place the facility is everything is right here located in the facility. You don't have to go anywhere. You stay here. The food is prepared for you. The staff is absolutely tremendous. I mean, you can't even understand I don't even want to go to a doctor back in the States at all because they're so hard to deal with the nurses and everything. The nurses, you know, over the course of stay in here become part of your family. And it's just really nothing to be worried about at all. The treatments have not any side effects or hurt, you know, few people may get a little fever or something but they're so attentive on helping you out and, and being good to you. Knowledgeable and nice. I mean both, that there's not a problem that way, the worst thing that's gonna happen is you're gonna get stuck with a needle a few times, which I'm sure that you already have a diagnosis I can't.


Well, I was just with him when we found out that he had prostate cancer and it was a shock, we sort of add process and I guess I sort of just lifted up to him to determine it's his body and his life and I trusted him and I think a lot of it was faith and faith that God was going to lead him to make the right decision for him and what was best for for us. And in faith coming here. It was when we left I have to admit we crossed into Mexico and I'm thinking what do we got earth into? But from the moment we stepped off the plane really it was. It was comforting. Gustavo was there, Dr. Branyon. And already I could just feel the abilities in a minute. We walked in and we knew we were in the right place.


Okay, I know it's been no, it's been tough on her because my diagnostic doctor, he's not a guy that I mean, that pulls punches and makes things seem nice. I'm like, he's looking at the scan and saying, you know, Oh, that looks pretty bad. You know, so I mean, it's a, it was a scary thing. I know. It was a scary thing for her. I've done enough research to maybe scare me a little bit more than she but I can't even imagine putting myself in her shoes. That was because you're just, I mean, it's like you're watching a ballgame and you can't do anything. about it, the players are out there playing. So I know it's different, hard on her. And it's great here that you have the ability for a couple of things. One is staying here just makes things easier. Some of the places that I talked to you stay in a hotel which you can do that. I mean it's just nice and comforting.


I didn't want to say anywhere else I want to be here. Yeah, this is family.


Yeah. And if you know I come back to try out you know the cancer is for the most part going there's still a solid, small solid tumor left. And I wanted to try to jump on top of that while I've got cancer down and go ahead and and get rid of that but my doctors are a little bit amaze, they don't know quite what to think back in the States. But hey. I'm good with it, whatever. Yeah, I would just like to say that, that you need to get a goal that's out in front of you in mind. And the diet changes and everything that you've got to do to get there. You need to do whatever it takes to get to that goal and look at that goal and concentrate on that goal. And don't worry about the past. When it's your treatment, it needs to be from you. And this is, you know, what's going to get you a long term cure is the decision in yourself. That can't be made by, you know, your wife, or your friends, a doctor. It can't be made by your family, anybody else but you get that decision in your mind of what you're going to do, and set that goal out there and do what it takes to win that prize.