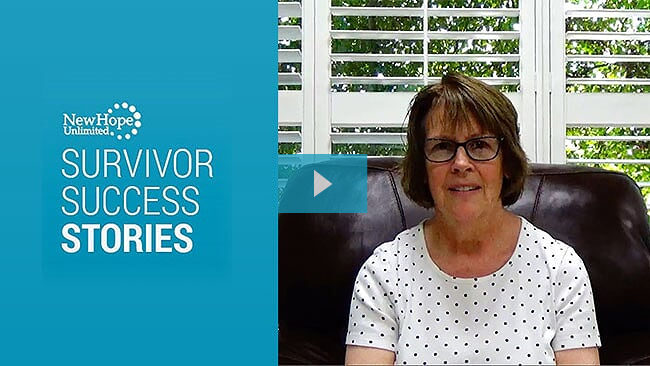 Hello, my name is Peggy Butler and my husband, Gary, was diagnosed with stage four colon cancer at the beginning of April of this year. We are from Montana. And we actually thought that he just had a hiatic hernia, which is what he was told by his primary physician probably for a year and a half before he actually got diagnosed with cancer. So he did have pain in his stomach for quite a long time that came and went and we just kept thinking it was the hiatic hernia and so we never did anything about it because they basically said there was nothing that could be done about the hiatic hernia.

And then one day Gary got a lot of pain in his stomach and he said, I think I need to go to the ER. So I took him into the ER and they ultimately did a CAT scan on him and came back and told us he had stage four colon cancer had a tumor in his colon that if they didn't remove it that day, he would develop sepsis and, you know, an intestinal blockage and the way the surgeon put it and would die a horrible death. So we were pretty blindsided by that if you can imagine, we, I think both of us were sitting there with our mouths hanging open. And we were just we didn't even have time to think about it. I said to the surgeon, well, when are you going to do the surgery and he said right now, immediately, we're taking him into the OR. So because of this COVID virus, I, of course, could not go in with him. I couldn't be with him in the hospital. And that was hard. That was hard. Anyway, he came through the surgery fine.

And then, of course, the next step was to go see the oncologist after he had healed up for a few weeks. So they made the appointment to go see the oncologist. And he basically said he had a rare form of colon cancer that was called small cell colon cancer that they typically only see in lung cancer, which was interesting. And he said we can do chemotherapy on you. But it isn't going to get rid of the cancer. He told us that. And I said, Well, you know, how long does he have if we do nothing? And he said, six months. And I said, how long does he have if we do the chemotherapy? And he said, Oh, probably another six months maybe. So I had done actually a lot of research on alternative cancer therapy. And I have family members who have experienced that with very good results. So I just kind of looked at him the oncologist and I said, so you're going to pour poisonous chemicals into an already sick body. And you think that that's the answer. And he just sat there and didn't say anything. And I said we will be looking at other alternatives. Thank you very much for your time. And that was the end of the oncologist.

So, like I say, we did have a family member that had gone down to another clinic in Mexico three years prior to this and they were very encouraging to us to do it. And they gave me books to read. And they gave us a nine-hour documentary to watch. And it was all fabulous, interesting information and very educational. And we originally tried to get to another clinic that's below San Diego. But because we don't travel at all internationally, we don't have passports. We applied for passports and because of the coronavirus, we just couldn't get them. So we were very discouraged about that and getting a little panicky that we weren't going to be able to get down here and did some more research on the internet, as did my relatives, and they found New Hope Unlimited, which is down below Yuma. And they did not after talking to their administrators, we found out that we did not have to have passports to come down here. So we were thrilled, and they luckily had openings for us. And so we, right away within a week, I believe we were able to come down here. And like I say, we don't travel, we don't travel out of the country. We don't travel anywhere. My husband is already dealing with a neurological illness and he's in a wheelchair as a result of that. So we really didn't have any misconceptions or anything about going to Mexico. We weren't one bit hesitant to do that. It was just like, that's where our hope is. That's where we're going. And we didn't have any problems with the airlines. Everybody is taking the utmost precautions with this Coronavirus to be safe to be everything very clean and we'd never felt in the airport in the plane anywhere that we were ever being exposed to anything. I mean, I think everybody's doing their very best to keep everybody very safe. So if you're hesitating to come down because of that, I wouldn't even give it another thought that was just no issue.

The facility here is wonderful. I love the smallness of it. It's homey. It's very one on one with people because it is small, the people, everybody the administrative staff, the nurses, the doctors, everybody is so friendly and accommodating. I just can't say enough about them. The treatments themselves, they're fantastic. At least my husband did not have a single side effect for many treatments. They're not painful. Some of them are wonderfully relaxing. The treatments are great, they're great. And you stay busy because you're having a treatment you're having like five treatments a day. So you're not lacking for anything to do. I just, I guess what I've learned from being here is we need to relax and take things a little bit easier in our lives, be more positive. And we didn't have bad diets before. I don't feel bad. The way we ate was pretty healthy, but we're going to do better. I can see that the emphasis really is on nutrition, however very, very important that is. So I would say to anybody who's facing a cancer diagnosis really consider an alternative therapy. With chemo, you're going to be sick, you're going to be tired, and it's not going to get rid of your cancer. I mean, we're very, very hopeful that by putting Gary's body in a state of health, and with all of the supplements and everything that they're giving us to take home that his body will heal itself. We're miracles.