Be a cancer survivor. At New Hope Unlimited, our administrative and medical teams are dedicated to providing the most comprehensive treatments that: Restore Your Body’s Disease-Free Condition

What is Kaposi Sarcoma?

Battling a progressive disease starts with being armed with essential information.

Kaposi sarcoma (KS) is a cancerous disease that causes patches of abnormal tissue to grow under the skin, including in the lining of the mouth, throat, nose, genitals, lymph nodes, or other organs. In severe cases of Kaposi sarcoma, patches (or lesions) may develop in the digestive tract and lungs. Blood vessels, blood cells, and cancer cells make up these lesions.

There are four types of Kaposi sarcomas:

Epidemic (AIDS-associated) Kaposi sarcoma
The most common form of Kaposi sarcoma. It develops in people who are infected with HIV, the widespread virus that causes AIDS.

Iatrogenic (transplant-related) Kaposi sarcoma
Also known as immunosuppressive Kaposi sarcoma, this disease develops in people whose immune systems have been suppressed after an organ transplant.

Kaposi sarcoma often appears as marks on the skin with the following characteristics:

Other signs of Kaposi sarcoma may include:

Early diagnosis is key to improving your Kaposi sarcoma prognosis. To identify if a suspicious skin lesion is Kaposi sarcoma, your doctor may perform a skin biopsy, which involves removing a sample tissue for examination in a laboratory.

To diagnose internal Kaposi sarcoma, your doctor may order the following tests:

Bronchoscopy becomes an unnecessary procedure unless you have unusual breathing difficulties or abnormal chest x-ray results. Similarly, unless a blood test finds blood in your stool, there may be no further need for an upper endoscopy or colonoscopy.

Why Choose Us for Kaposi Sarcoma Alternative Treatments?

Allow us to take you under our care and provide the comprehensive care you deserve. Here at New Hope Unlimited, we customize treatment programs for your individual needs and ensure you receive the most advanced care possible. Our anti-tumor protocols not only slow down the spread of cancer cells, but they also play a role in rehabilitating your overall well-being. Click here to learn more about cancer strategies that promote fewer side effects than mainstream medicine.

The Current State of Immunotherapy for Pancreatic Cancer
July 5, 2022
NHU 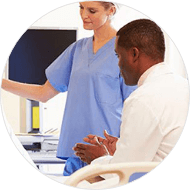 Further, New Hope Unlimited has maintained its exceptional partnership with Hospital Migoo, a medical group composed of certified physicians and specialists committed to our patients’ care and well-being.

1. Are there ways to prevent Kaposi sarcoma?

Currently, there are no proven ways to completely prevent Kaposi sarcoma. But you can significantly lower your chances by avoiding the known risk factors for HIV, especially by avoiding unsafe sexual practices.

Most definitely. Kaposi sarcoma and other cancers are wasting diseases, and almost 50 percent of cancer patients succumb to their disease due to malnutrition. This is one of the main reasons we offer proper nutrient supplementation.